Could a magic Christmas dwarves make an European Union thanks to Brexit a better place for all of us?

Pretty cheesy and smarmy looking dwarves and elfish, wearing a stickers ´Merry Christmas´, big as such a normal small dog, surprised me at my last shopping in one of biggest supermarket store close my London´s home.
I went to the store and wanted take a shopping basket and as usually continue into store shopping my normal weekly grocery stuff. But I was not able to continue in my path. I simply could not believe. There were standing lots of Christmas dwarves (according to long and pointed ears it was an Irish based dwarves - but I wont to say that directly cos it is probably not political correct to judge someone only by his exterior even should be a Christmas dwarves), staring at me - be fair - by very nice and friendly way, that´s truth, but...

I was shocked cos I used to have got some prejudice about dwarves. Still could remember how we - on the Czech side of borderline - were laughing at the people on the German side of that and were amused that they have no good taste for buying lots of cheesy gypsum dwarves from the small ´market villages´ placed around the Czech-German borderline. German customers were happy to have got some nice decoration for their gardens (sometimes it was even case of my relatives living on the German side of borderline) for great (low) price and Czech people were joking about their terrible ´typical German taste for cheesy art´ (cos they really seriously thought it is kind of ´art´) and German people called us ´the laughing besties´ (according to Czech humour based almost on the ironic and very cynical sense of humour - far cry of ´typical childish German, and specially Bavarian, sense of humour´ - obviously this idea has taken by Czech point of view so does not mean it is truth :-) ) and thought we are absolutely non-able be organised as they have always been - just a stupid jokes making people (´German point of view´ - again doesn´t mean it is truth:-)).

So while we have been ´having these petty spats between us´, Vietnamese trades (there has been living large Vietnamese community in the Czech Republic and Germany - not refugees, just a legal imigrants, hardworking small business people never living on the benefits) who were selling these dwarves and other stuff has been earning lots of money and then were able to put their children to the best private schools on the Czech side of borderline and started making bigger their businesses and employ to Czech people as employee and a private tutors for their children (which has been always big pleasure cos usually these Vietnamese children has been very smart and hardworking).
Sometimes I am quite amused about Czech-German relationships - they can have shown very well all problems in EU in a small case. We ´both´ need each other cos we are living in a close neighborhood, we don´t like (or know / understand) usually each other but we have to collaborate together cos without that we have just a small change ´to survive´. And while we are joking about each other someone else is taking an advantages of that.
Maybe for that I like London - there is so many nationalities from all world living I think in very good relationships (more or less) - I can realise here how petty our spats in the Europe - in EU sometimes are.

I think we just have to talk a turkey (not cos in USA Thanksgiving is already coming:-D ) - there is no big love inside EU. Every member of EU is a member of this Union strictly only for its benefits taking of membership here. Unfortunately the pure original nice idea just put people of a different European nation together to making dialog and Europe stronger, is not very well working (just only in some extra examples to be completely honest - big thanks all of them they do that or try to do that!). We cannot make EU strong only on the trade and free movement of people and goods or ´peaceful idea´ (just keep our eye on Germany an Italy after 2WW, which is not so necessary today, or stick together in spite of Russia intervention, etc.) - in spite how good and useful this based ideas are - we need something more...

Maybe... maybe we need some common interest what can talk to the normal people (no just rules and bans coming from Brussels) - even the dwarves could be...  So I hope these lovely and totally crazy and smarmy British (or Irish) or Vietnamese (Czech - German or whatever else) dwarves could help us to make us a better friends in EU - not depends on Brexit. It is up to us - normal people in Europe (let me ´forget´ Brussels totally;-) ). G-d blessed Dwarves!

By the way during my thinking about these issues I was just still standing at the supermarket in the front of the dwarves laughing quite loudly being unable to stop it. There were people walking around me and at their faces could you watch they are not able to catch why I am so much amused with these dwarves. Maybe when they will be reading this post then they could understand I am not totally crazy how I looked like. But maybe I am - to write a post about dwarves...? My Goodness!


Here you can see ´ugly´ - Czech - German - Vietnamese Dwarves on the borderline (at the snow) :-) 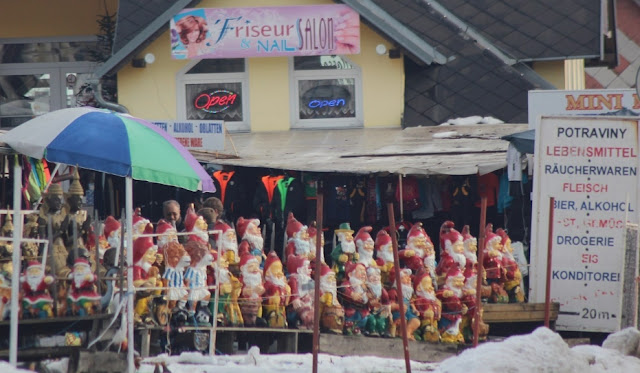