Don´t change your change for a chicken burger. You could look like a charity case... as me 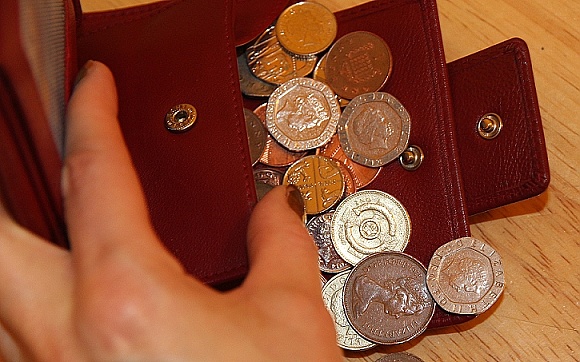 Highly concentrated, as dealing with money does usually require, I was rummaging in my wallet to picking up change. Probably normally stuff but I did something wrong there  - I don´t know what. And that started a small crazy story.
Oh, maybe it took me a little bit more time then is usual and my business attracted attention of people around me in the fast food where I was standing in the front of cashier.
I had a great two ideas - the first one was: take something to nibble and the second one: one and rid off my wallet lots of change. For this reason I took a chicken burger for only 99 p which I usually don´t eat. But two great advantages: quick food in a busy day and make my wallet lighter.
I was almost done when suddenly some man next to me waiting for his food walked up and put on the desk one pound with a laugh and said: "Oh, just take it."

I started be very much embarrassed. I refused that with thanks: "Thank you very much, but I have the money, just searching the change..." Man wearing a working clothes with a reflective vest was just laughing at me and just moved the coin near to me and then he left me in the front of cashier - cheerful girl who´s English was more poor then mine. She quickly took the coin and gave ´me back´ one penny and a moment later my chicken burger.
Be honest - it was really fine burger, how chicken burger in fast food could be, but it made me not very well feeling. All time when I was eating that and then even later when I was walking down the street, sitting in tube and changed for DLR I was still embarrassed that I looked so poor that someone could wonder if I have one pound (oh, actually just 99 p). And then I just remembered the happy and amused expression in the face of that man and I it occurred me that maybe really made him a happy to help some crazy woman looking for a so small amount for buying a chicken burger and the idea making someones happy just with one pound. He wouldn´t be I am embarrassed.
So I take it like a challenge and I am now considering to who I will give one pound to making this person happy or making someones day a better and then he or she will be continue in that.
Cos actually it is not about one bloody pound, it is that you always know that around you are not just a selfish people and always is there someone be prepared to help you - even in the large city as London really is.
This is why I love London - big city with people they are ready to help you.
Location: London, UK